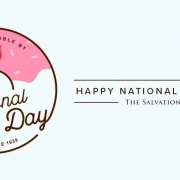 On the first Friday in June, Americans celebrate the goodness that is donuts. But did you know that National Donut Day actually has its roots in doing good?

The Salvation Army in Chicago celebrated the first National Donut Day in 1938 to help those in need during the Great Depression and to commemorate the work of the “Donut Lassies,” who served donuts to soldiers during World War I.

In 1917, The Salvation Army began a mission to provide spiritual and emotional support for U.S. soldiers fighting in France during World War I. About 250 volunteers traveled overseas and set up small huts near the front lines where they could give soldiers clothes, supplies, and, of course, baked goods.

Despite discovering that serving baked goods would be difficult considering the conditions of the huts and the limited rations, two officers – Ensign Margaret Sheldon and Adjutant Helen Purviance – began frying donuts in a small pan. These tasty treats boosted morale and won the hearts of many soldiers. 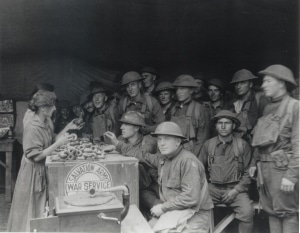 Nicknamed “Donut Lassies,” the women who served donuts to troops are often credited with popularizing the donut in the United States when the troops (nicknamed “Doughboys”) returned home from war.

National Donut Day is held annually on the first Friday in June, and The Salvation Army celebrates the work of the original Donut Lassies by delivering donuts to those in need and to donut lovers across the country.

The original recipe from the front lines:

William and Catherine Booth build a movement by preaching the gospel of Jesus Christ to the destitute in London’s East End.

William Booth embarked upon his ministerial career in 1852, desiring to win the lost multitudes of England to Christ. He walked the streets of London to preach the gospel of Jesus Christ to the poor, the homeless, the hungry and the destitute.

Booth abandoned the conventional concept of a church and a pulpit, instead taking his message to the people. His fervor led to disagreement with church leaders in London, who preferred traditional methods. As a result, he withdrew from the church and traveled throughout England, conducting evangelistic meetings.

In 1865, William Booth was invited to hold a series of evangelistic meetings in the East End of London. He set up a tent in a Quaker graveyard, and his services became an instant success. His renown as a religious leader spread throughout London, and he attracted followers who were dedicated to fight for the souls of men and women.

To congregations who were desperately poor, he preached hope and salvation. His aim was to lead people to Christ and link them to a church for further spiritual guidance.

Many churches, however, did not accept Booth’s followers because of their past. So Booth continued giving his new converts spiritual direction, challenging them to save others like themselves. Soon, they too were preaching and singing in the streets as a living testimony to the power of God.

In 1867, Booth had only 10 full-time workers, but by 1874, the number had grown to 1,000 volunteers and 42 evangelists, all serving under the name “The Christian Mission.” Booth assumed the title of general superintendent, with his followers calling him “General.” Known as the “Hallelujah Army,” the converts spread out of the East End of London into neighboring areas and then to other cities.

While reading a printer’s proof of the 1878 annual report, Booth noticed the statement “The Christian Mission is a volunteer army.” Crossing out the words “volunteer army,” he penned in “Salvation Army.” From those words came the basis of the foundation deed of The Salvation Army.

From that point, converts became soldiers of Christ and were known then, as now, as Salvationists. They launched an offensive throughout the British Isles, in some cases facing real battles as organized gangs mocked and attacked them. In spite of violence and persecution, some 250,000 people were converted under the ministry of The Salvation Army between 1881 and 1885.

William Booth began The Salvation Army in 1865 as a means to help the suffering souls throughout London who were not willing to attend—or even welcomed into—a traditional church.

Thieves, prostitutes, gamblers and drunkards were among his first converts to Christianity, and as his ministry grew, the gospel of Jesus Christ was spread far and wide to the poor, the vulnerable and the destitute.

Though General Booth died in 1912, he laid a firm foundation for the life-saving work that The Salvation Army continues to perform today in 131 countries.

Catherine Booth was known as the “Army Mother.” In her world, women had few rights, no place in the professional sphere, and a minimal presence in church leadership.

Yet in her marriage to William Booth, she became an evangelist, preacher, theologian and co-founder of The Salvation Army.