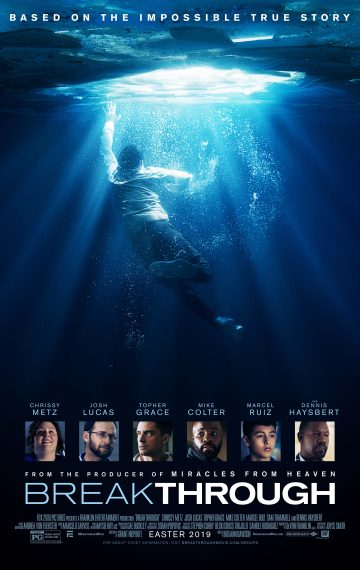 BREAKTHROUGH is based on the incredible true story of one mother’s unfaltering love in the face of impossible odds. When Joyce Smith’s 14-year-old adopted son John falls through an icy Missouri lake, all hope seems lost. But as he lies lifeless, Joyce refuses to give up. Her steadfast belief inspires people around her to pray for John’s recovery—even in the face of every case history and scientific prediction.

From Producer DeVon Franklin (MIRACLES FROM HEAVEN) and executive producers, Pastor Sammy Rodriguez and Stephen “Steph” Curry, and adapted for the screen by Grant Nieporte (SEVEN POUNDS) and from Joyce Smith’s own book, BREAKTHROUGH is an enthralling reminder that faith and love can create a mountain of hope, and sometimes even a miracle.

DeVon Franklin, Pastor Jason Noble, and John Smith recently sat down with The Salvation Army to talk about the movie, their ministries, and building deep relationships through faith in Christ.

John, how did this event influence your relationship with Pastor Jason?

John Smith: I actually didn’t know Pastor Jason; we had never formally met. He was new at the church and had only been there for three months. But when the accident happened, he stuck by my family’s side and by my side. There were moments when I knew he was called to mentor me and ever since then, he’s been doing a great job of it. It’s just been a growing brotherhood throughout all of this.

Pastor Jason, what surprised you about this event and the way it has affected your ministry?

Pastor Jason Noble: Afterward, we had 150 healing miracles in our church. God just started us on fire. This crisis has brought families, church members, and communities together. Since last February, we’ve been going full–time on the film.

The movie is absolutely mesmerizing. How does it match what really happened?

John: That person Marcel Ruiz portrayed is what I went through. It was really accurate. From the point of the crisis to everything else, what he portrayed was true.

Pastor Jason: We’re thankful for DeVon. He told us from the beginning that we were going to do the best we can to maintain the integrity of the story and that’s exactly what happened. The timeframe may have been a little different, or in a different context.

The movie shows Joyce and I had a tense relationship, but we really never had an argument. Those were composite characters designed to show what we were facing as a 90-year-old Assemblies of God church with a 39-year-old pastor coming in and trying to change things around. At the end of the movie, a teacher says to John, “My husband died, but you lived. Why?” Some people say, that didn’t happen, but it actually did.

DeVon, your work as a studio executive, Christian author, and now movie producer has most recently included live clips of you praying on social media. How has this influenced your ministry?

DeVon: In the movie, you see Joyce Smith go into that emergency room and she prays and her son, John, comes back to life. She demonstrates the power of prayer. Throughout the whole experience, prayer is an integral part of John’s recovery. We portray that in the film.

So, organically and ironically, as I’ve been praying for people through Instagram, Facebook, and other social media, the response has been unbelievable. Since the beginning of the year, I’ve gained more than 100,000 followers. A lot of it has to do with the power of prayer.

I’m not saying this as a judgment, but so often our prayers are self-centered. So much of social media is “me, me, me” or “selfie, selfie, selfie.” But my prayers are about other people, rather than about me. I think people are deeply moved by that because so few people in their lives are concerned about them, are praying for them, and praying over them. I think that is where I’ve seen the power of prayer and social media come together. It wasn’t intentional. It’s just something that started organically. I’m just so grateful. In many ways, I’m subconsciously inspired by Joyce because she is a praying mother—every time I’m around her, she prays!

John, when you realized that the whole church and community was praying for you, how did you react?

John:I was in awe because, at that time, people were seeing Missouri in two lights; as a destructive light, and as a beacon of hope. The Michael Brown tragedy in Ferguson, Mo., was happening around the same time Breakthrough was taking place. So, they saw the destruction in Ferguson, but they also saw the hope coming from St. Louis. Families came together to pray for me; all of St. Louis came together with open arms, praying for me. From churches to schools to everybody in this community, people were praying for me.

During that time, I was struggling with thoughts like, what if I don’t get all my strength back? What if I’m not 100 percent anymore? But having St. Louis, my church, and my family pray for me and tell me it’s going to be okay, and walk with me through that, made the difference.

If there was anything else you’d want in this movie, what would it be?

John: I think DeVon captured the key points that needed to be told to make this story complete and to make BREAKTHROUGH what it is today—and that’s family. Within the film, you see everybody experience their individual breakthroughs: from my mom to me to Tommy to everyone. I think that’s so important because, if I would have seen heaven, it would have been just about me. But the story is about everybody’s individual story within the story—their own breakthrough. That’s what you see, and I think that’s what’s truly amazing throughout the film.

It’s interesting how in a breakthrough, something or someone has to be broken.

Pastor Jason: That’s the hardest part of it. Everyone wants a miracle, but to get to one is hard. There has to be something you need a miracle for. All the stuff God took Joyce through really happened. A month into my pastorate, we had a long conversation.

What would be your advice to a young pastor coming into a church?

Pastor Jason: I would have more advice for the congregation: give him grace, take time to know him, give him the benefit of the doubt, and give him a clean slate. Churches have many expectations, but the reality is if we don’t replace the pastors who are retiring with young pastors, who do we have? So, back him up 100 percent and give him grace—be his cheerleader!

John, how do you think this event will impact your future?

John: I don’t know my future, but I do know that God has a great plan for my life. He’s brought amazing people into it, from Pastor Jason to Pastor Sammy Rodriguez to President Scott Hagen to DeVon Franklin. He’s brought all of these great mentors into my life. We’ve been building relationships, building a brotherhood, and building a family. They’re going to walk me through this because God has brought me here for a reason.

So, is college your next step?

John: Yes, I’ve met Scott Hagen, president of North Central, a Christian university in downtown Minneapolis, Minn. That’s where I’ll be attending this fall to study to pursue life as a pastor.

DeVon, what do you want people to take away from this film?

DeVon: It releases April 17 all across the world and in time for Easter. We’re excited to see what God wants to do. My hope is that their faith will increase and that they’ll tell people about it. I want them to walk out of the theater saying, “you gotta go see BREAKTHROUGH! It was amazing and here’s why.” We, as producers of the film, have done all we can. It’s on the people now!